When we knit two socks at the same time, we can put them on right after we bind off stitches. This solves one of the saddest knitting issues – forgotten lonely socks with a not-knitted or (at best!) half-knitted mate.

It also eliminates the need to make notes if we decide to adjust the sock pattern. Because we make both socks simultaneously, they will be identical twins even if we change the pattern “on the go”.

The fact that we knit two socks together doesn’t mean that there should be lots of needles and tangled balls of yarn lying around us while we hectically go back and forth between socks. No. We can make two socks at the same time with just one long circular needle and one ball of yarn.

Here’s how we can do it when we knit toe-up socks, like the Sneaker Socks we made during a recent knit-along.

You can also watch all steps described below in this video tutorial.

To make things easier to see and understand, I’ll use chunky yarn and 10 mm (US size 15) needles. Of course, normally we work with a much thinner yarn and needles when we knit a pair of socks.

Let’s cast on stitches using the seamless cast on recommended in the Sneaker Socks pattern. This cast on forms a nice invisible edge, but it is not easy to figure out how to use this type of cast on when we knit two socks at the same time. That makes it a good example for this tutorial.

Find one end in the ball of yarn. Make a slip knot, place it on one tip of the circular needles and cast on 4 stitches as instructed in this tutorial.

We’ll start with only 4 stitches because we are making a pair of “mock socks” and we don’t really care about their size or fit.

Now find the other end in the same ball of yarn. If you used the end from outside the ball in step 1, look for the end that is inside the ball, and visa versa.

Use that strand to make a slip knot and place it next to the stitches we cast on in step 1. Then make 4 stitches the same way we did in the previous step.

The good thing about using two ends from the same ball of yarn is that we don’t get any yarn tangles. If the two strands of yarn get twisted, it is easy to fix it by rotating the ball.

Another benefit of working from the same ball of yarn (aside from eliminating the need to rewind the yarn and guesstimate how to divide it equally into two balls) is that we can use up all yarn in that ball. If you don’t worry about the exact length of the cuff, keep knitting the socks until there is just enough yarn left to bind off all stitches. Efficiency galore! 🙂

The only situation where we have to knit from two separate balls is when we use self-striping yarn and we want the socks to have the same colour pattern.

Move both groups of stitches around the needle so that the bottom of the cast on edge is at the top of the needle.

Pull the needle to the right to move both groups of stitches to the cord of the circular needles.

Then use the same needle and the yarn at the right side of the work to pick up and knit 4 stitches from the strands between every two stitches of the first group of stitches.

Watch how to do it in this part of the video tutorial.

Use the other strand of the yarn to pick up and knit 4 stitches from the strands between every two stitches in the second group of stitches.

Watch how to do it in this part of the video tutorial.

Rotate the work so that the needle with picked up stitches is at the bottom.

Now we are ready to work the first round.

In this round, we’ll get rid of the slip knots and knit the stitches of both socks-to-be for the first time. The stitches that are now sitting on the top needle are twisted, so we’ll make sure to untwist them before we knit them.

You can also twist the yarn tail with the working yarn to make sure that vulnerable stitch at the bottom is safe.

Then untwist and knit each stitch in the first group of stitches as it is demonstrated in this part of the video and in this photo tutorial.

This step is easy – we simply repeat what we’ve just done in the previous step, but this time we’ll use the other strand of yarn and the other group of stitches sitting on the same needle.

Now it’s time to rearrange stitches on the needles as we normally do when we use the magic loop technique. If this technique is new to you, here’s a tutorial that will help you understand how it works.

The stitches that were knitted in steps 1 and 2 of the first round are now on the cord of the circular needle and the “unworked’ stitches are on the needle tip ready to get knitted.

Knit all stitches of the first group with the yarn that is at the right side of the work.

Then use the other strand of yarn and knit all stitches in the other group.

This time we knit the stitches the usual way without any additional untwisting.

That’s it – we’ve just worked the first round of knitting two socks at the same time. It wasn’t that hard, was it? 🙂

Place a marker to mark the beginning of the round. Now, that we have two sets of stitches on the needles, it is very easy to get confused and forget where exactly the round begins. Placing a marker helps to avoid this confusion.

It is really hard to understand where you left off and you can end up working the previously knitted group of stitches again. This will make one sock longer than the other and will disrupt the stitch pattern if you are working in any pattern other than stockinette stitch or ribbing.

I learnt this lesson the hard way. After I had to undo a part of one sock to make sure it has the same number of rounds as the other sock, I always make sure I knit at least one stitch of the second group of stitches every time I have to put the work down.

MAKING THE TOE PART AND THE BODY OF THE SOCKS

We’ve set up the work and now we can follow the pattern instructions to shape the toe part of the socks and to knit until it’s time to shape the heel.

The process is always the same:

1.Use the strand of yarn that is at the right side of the sock to work the first group of stitches on the left needle. Then drop this yarn.

2.Take the second strand of yarn and use it to work stitches of the second group.

3.Turn the work and rearrange the stitches on the needles to make it possible to knit the other two groups of stitches.

4.Use the strand of yarn at the right side of the work (the same yarn we used in step 2) to work the first group of stitches on the left needle. Then drop this yarn.

5.Finally, take the second strand of yarn and use it to work the stitches of the second group.

This way both socks will grow simultaneously and will have exactly the same size.

As an example, let’s make a simple short row shaping similar to the shaping of the heel part of the Sneaker socks.

After we work to the last stitch of the first group of stitches and make the “wrap and turn”, we don’t start to work on the other sock. Instead, we turn the work and continue the short row shaping of the same sock.

All this time the other sock is just sitting on the needles waiting for its turn.

Only after we work the last short row do we move on to the second sock. It is easy to do as usually the instructions for the last row of the heel shaping tell us to knit to the end of the group of stitches used to make the heel.

So we work to the end of the heel stitches of the first sock, pick up the other strand of yarn and start to shape the heel part of the second sock.

As you can tell from the photo, the first sock is now waiting until we finish the heel shaping of the second sock.

When the heels of both socks are shaped, we can resume working in the round to make the cuff of both socks at the same time just as we did when we made the toe part and the body of the socks.

Then we bind off stitches (any of the stretchy bind offs explained in this tutorial will work), hide the tails and put the socks on or gift them to someone special. 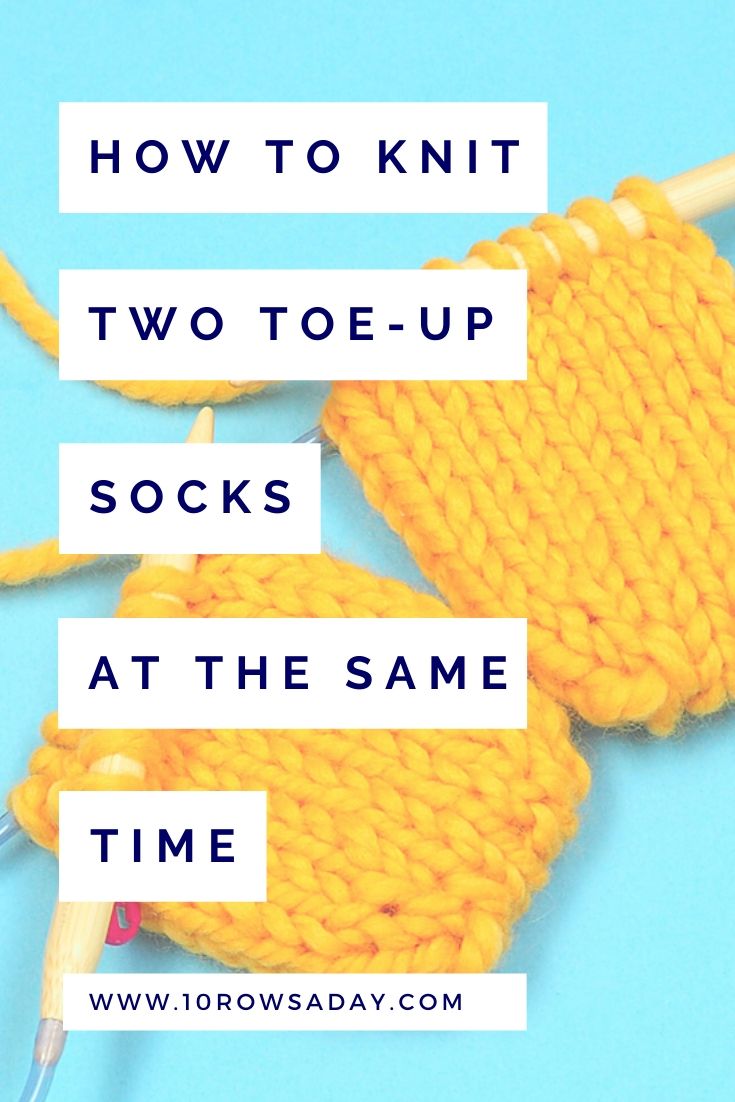 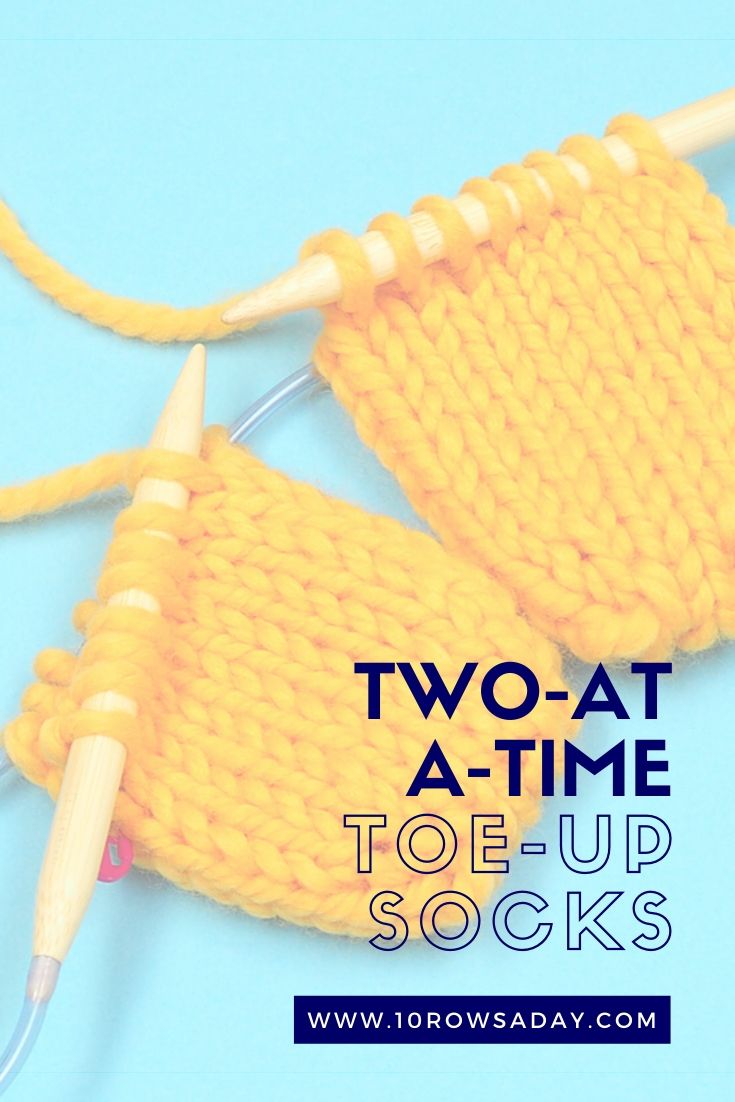 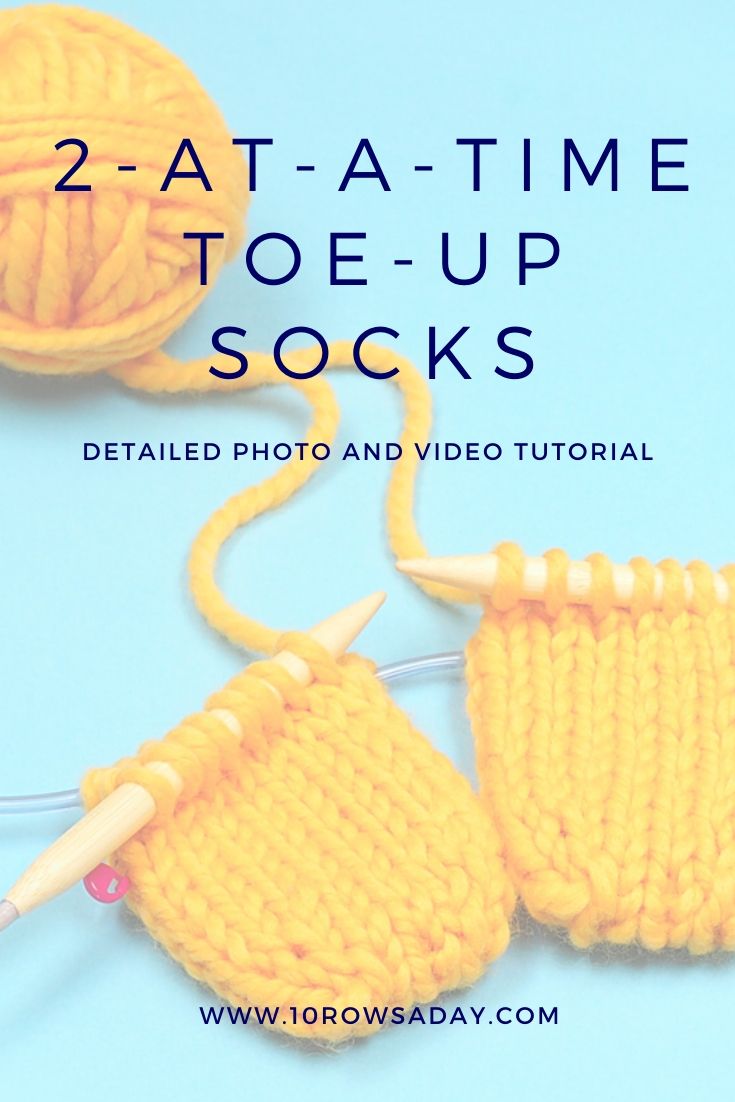 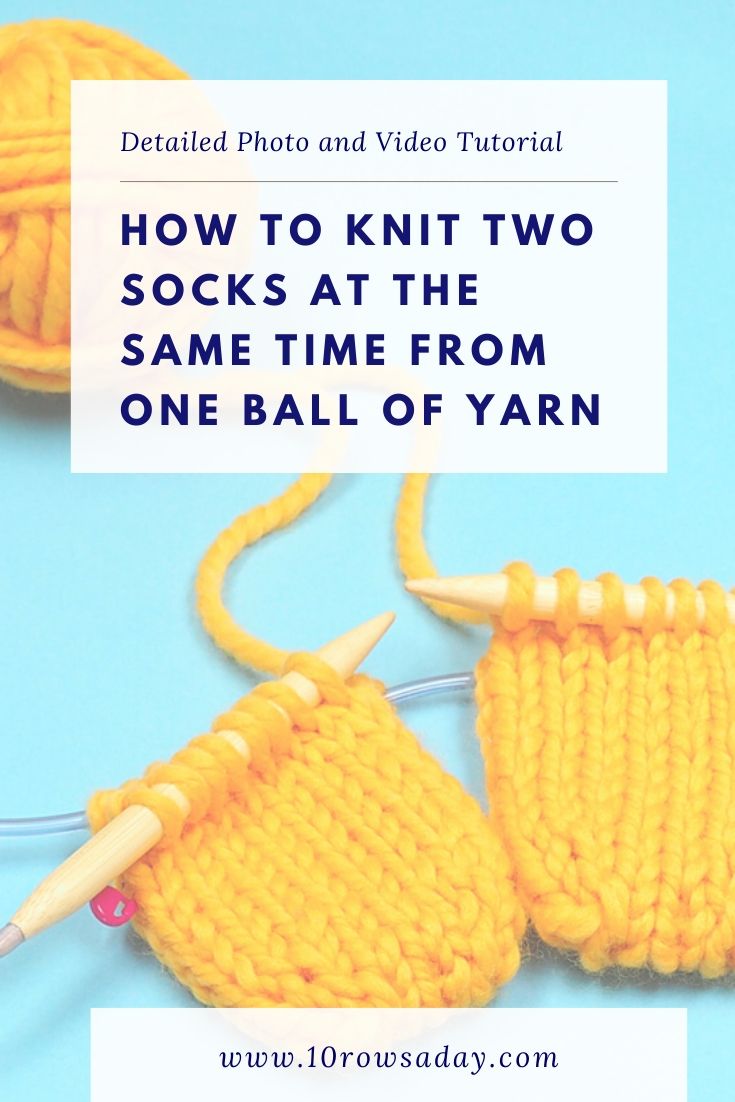