One of the best ways to cast on stitches for 1×1 or 2×2 ribbing is to use the long tail tubular (also known as Italian) cast on. It is the type of cast on that forms a lovely edge looking like columns of stitches flowing from one side of the work to the other.

We’ve already discussed how to make it when we cast on stitches for a project worked back and forth. But what to do when we want to use this type of cast on to start top-down socks, mittens, a hat, a neckline of a sweater or any other project that is worked in the round.

Technically, it is possible to join stitches for working in the round right after we cast them on using the long tail tubular cast on. I did it a few times and I can say that it is doable.

But, it is an extremely tedious task with a high risk of twisting the cast on edge. There is a much easier way to get the same nice-looking stretchy edge without the pain of moving fragile yarn wraps between needles.

Let’s see how we can do it step by step. You can also watch every step in this video tutorial.

1.Leave a tail that is at least four times longer than the length of the cast on edge. Place the tail on your left thumb, and the working yarn on your left index finger. Hold both strands with the other three fingers of your left hand, just as we do when we cast on stitches using the usual long tail cast on.

2.Now take a needle in your right hand, and place it on top of the strand stretched between your left thumb and index finger. Move the needle around the strand to create a loop by twisting the yarn. Watch how to do it. This loop is our first stitch.

As you see, we’ve just formed a new stitch.

This manoeuvre created one more stitch.

Repeat steps 3 and 4 to cast on as many stitches as you need for the project. If the ribbing starts with a knit stitch (as it usually does), finish casting on after you make a stitch in step 3.

Then twist the working yarn and the tail at the very bottom of the last stitch and turn your work.

Now the stitches are not just flimsy wraps they used to be right after we cast them on. Set up rows gave them some body and now we can confidently arrange them for working in the round.

No matter what kind of tools you decide to use, place the work on a flat surface to make sure the cast on edge is not twisted around the needles. Also, pay attention to the working yarn – it should be at the right side of the work.

That’s it – we are all set to work in the round. If you plan to work in 2×2 ribbing, follow the steps described in this tutorial. To work in 1×1 ribbing, simply alternate knit and purl stitches to the end of the round.

After a few rounds, you will see that your project has a beautiful stretchy edge.

There is only one imperfection – the spot where we joined stitches. The set up rows formed a one-row long fabric, and even though this one row is fairly small, it does cause a tiny gap in the place of join.

This gap is easy to fix with two overhand stitches. You can do it after you work a few rounds or when you weave in the tails.

1.Thread the yarn tail that is at the cast on edge into a wool needle. With the right side of the work facing to you, insert the wool needle from front to back under the strand that forms the corner on the other side of the gap.

Pull the yarn through.

2.Now pull the edge a bit so that you could see the wrong side of the work.

Pull the yarn through, secure it and weave in the tail.

These two stitches not just close the gap, they completely conceal the spot where the stitches were joined for working in the round. Now no one will ever know that we used the easy way of working long tail tubular cast on in the round. 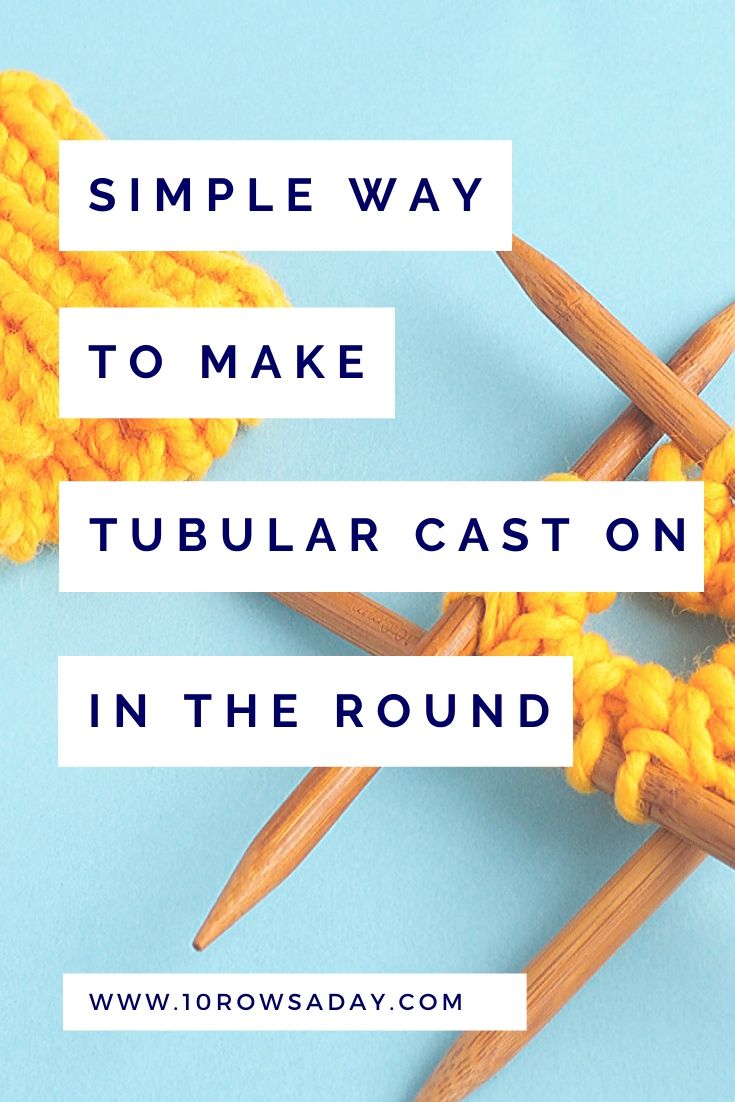 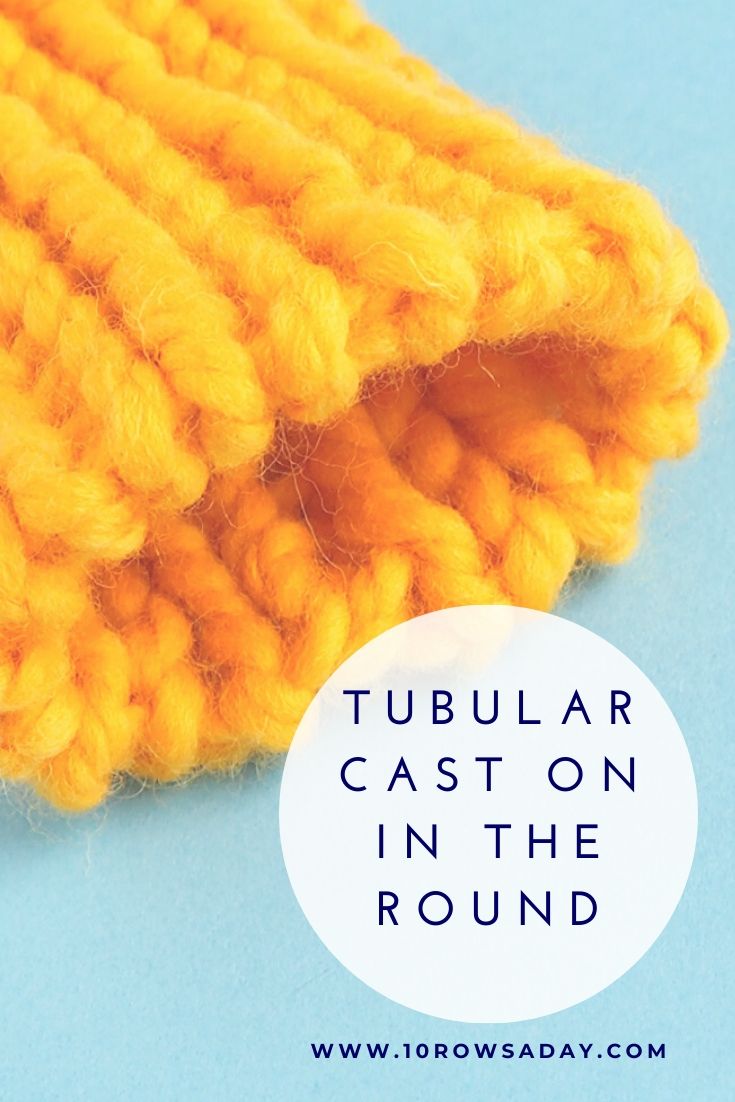 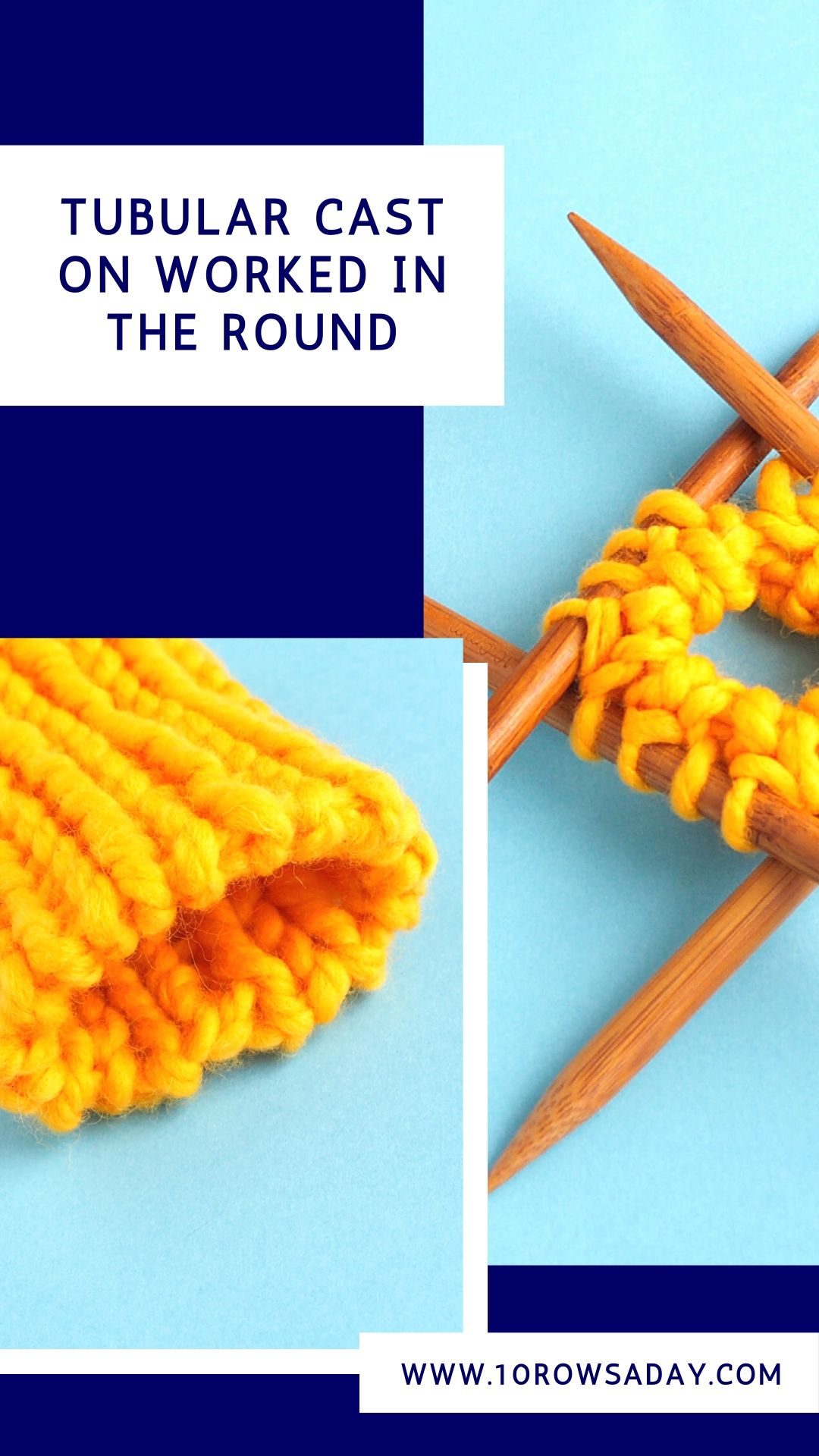