When we want to add a pom-pom to a hat, scarf, pillow or any other project, we can either make that pom-pom in a solid colour, or we can make it using several colours for more fun. A colourful pom-pom will add a frill to a project knitted in one colour, and it will match perfectly a project knitted in a colour pattern.

In this tutorial, we’ll see how we can make a multicoloured pom-pom without a pom-pom maker or other sophisticated tools. All you need is your hands, yarn in different colours and a pair of scissors.

With this limited number of supplies, we’ll easily make colourful pom-poms of two kinds – one with all colours blended together and one with patches of different colours.

This type of pom-pom is called a “lazy pom-pom” because we make it quickly without any special tools or additional preparation.

Let’s see how we can make two kinds of multicoloiured pom-poms step-by-step.

If you are a visual learner, click here to watch every step in a video tutorial, or scroll to the bottom of this page to watch the embedded version of the video.

Align strands of all colours you plan to use in your pom-pom.

I’ll make a pom-pom in two colours – golden and red, but you can use as many colours as you like. To make sure the colours work well together, use the trick described in this tutorial

Wrap the aligned strands around your thumb leaving a tail about 10cm / 4″ long. This will keep the tail from shifting.

It doesn’t matter whether you decide to wrap the yarn around your left hand, or around your right hand. Choose the way that feels more comfortable to you.

Wrap the aligned strands around the fingers of your hand.

The size of the pom-pom is determined by the number of fingers you wrap the yarn around.

For a tiny pom-pom, wrap the yarn around your index and middle fingers held together.

For a medium-sized pom-pom, wrap the yarn around your palm and four fingers held together.

For a bigger pom-pom, spread the four fingers and wrap the yarn around the part that is closer to your fingertips.

As you see from the photo above, my pom-pom will be of medium size, because I wrapped the yarn around my palm and four fingers.

Another issue we face in this step is how many wraps we should make. Generally, the more wraps we make, the fuller the pom-pom will be.

Of course, a lot depends on the thickness of the yarn. If you use fine yarn, you will have to make a lot of wraps. When the yarn is bulky – like the yarn I use to make my bright pom-pom – 40 to 50 single-stranded wraps should be enough.

The best way to check whether your pom-pom is full enough is to carefully ease your fingers out of the wraps and squeeze the wraps to see how fluffy they are. If the wraps feel a bit skinny, put them back on your fingers and make a few more wraps.

Cut the yarn leaving a medium-length tail (around 15cm / 6″). Then ease your fingers from the wraps being careful not to tangle the wraps.

Tie the yarn tails with a simple knot.

Wrap the yarn tails around one side of the tube formed by the wraps.

Pull the yarn tails tight and tie them with a square knot. Watch how to do it in this part of the video tutorial.

As a result, you will get a yarn flower like the one shown in the photo below:

Use your scissors to cut the folds on both sides of the yarn flower.

This is our pompom. It is a bit uneven, so we’ll give it a haircut.

If you plan to attach this pom-pom to a hat or some other item, hold both yarn tails in your hand to keep them safe. Here’s how to do it.

Trim the longer strands of the pom-pom to shape it. If you feel that the pompom turned out to be bigger than you planned, trim all strands to adjust the size.

Now, let’s see how we can change the colour pattern in our pom-pom and make it more “patchy” than “messy”.

POM-POM WITH PATCHES OF DIFFERENT COLOURS

Take a strand in one of the colours that you plan to use in your pom-pom. Wrap that strand around your thumb and make a few wraps around your palm and/or fingers.

The way we arrange the yarn wraps in this step will form the colour pattern of the pom-pom. The more wraps we make in each colour, the more prominent the patches of that colour will be in the pom-pom.

If I arrange the yarns in four sections – two sets of [one stripe in golden colour, one stripe in red colour] – my pom-pom will have spots in two colours, a lot like the spots we see on cheetahs (or their smaller cousins – cats).

Every time you change colours, make sure you leave a tail that is long enough to stick out at the top or bottom of your fingers.

Once you finish arranging the yarns in different colours in the stripes of wraps, check the fullness of your pom-pom. If it is not full enough, add a few more wraps.

When you are happy with the fullness of the pom-pom, follow the same steps 3 and 4 that we performed when we made a pom-pom with blended colours – cut the yarn leaving a medium tail, tie the first and the last yarn tails with a simple knot, wrap them around one side of the wraps, then around both sides of the wraps making a yarn flower, cut the wraps and trim your pom-pom to make it as cute as you like.

Use the long tails to attach the pom-pom to a hat or any other garment. You can do it either with a crochet hook or with a wool needle. The second part of this tutorial explains both ways.

Feel free to use yarn scraps to make lots of colourful lazy pom-poms and arrange them in garlands, wreaths or wall hangings. 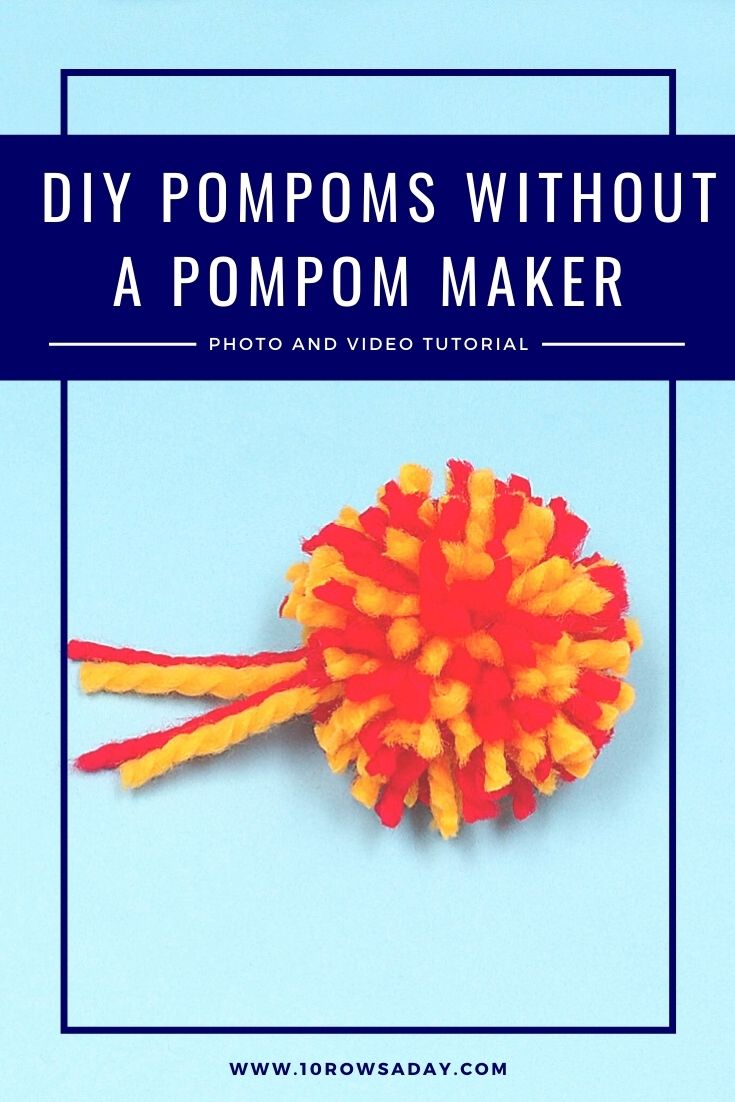 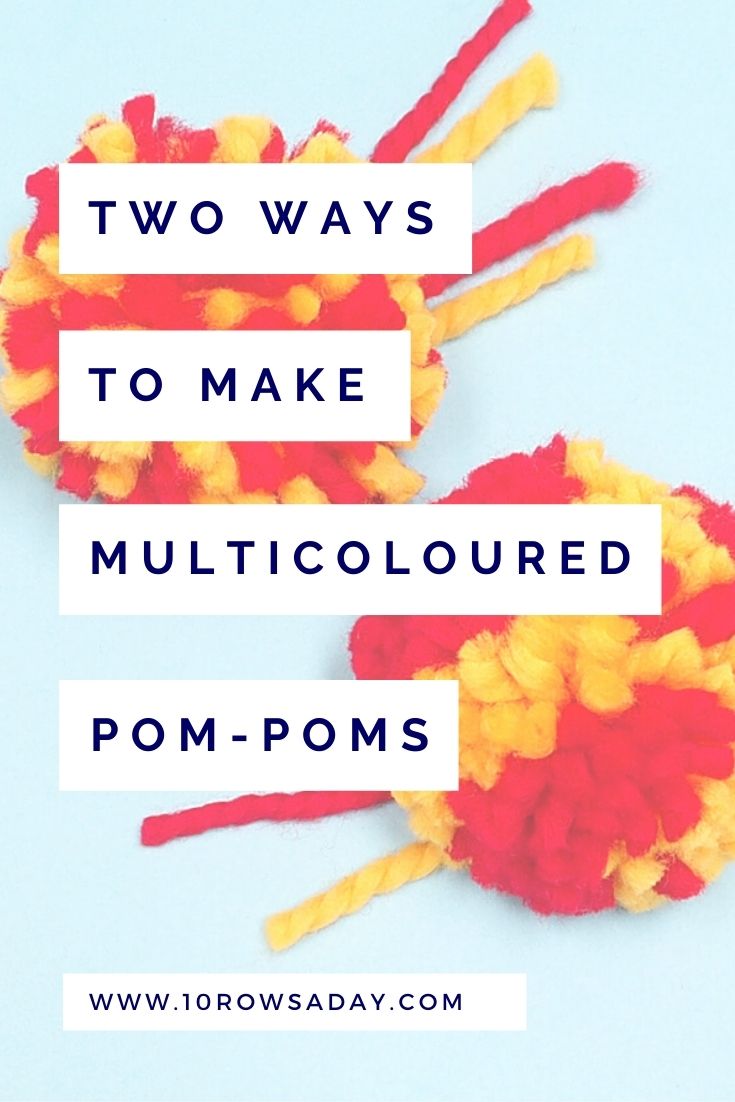 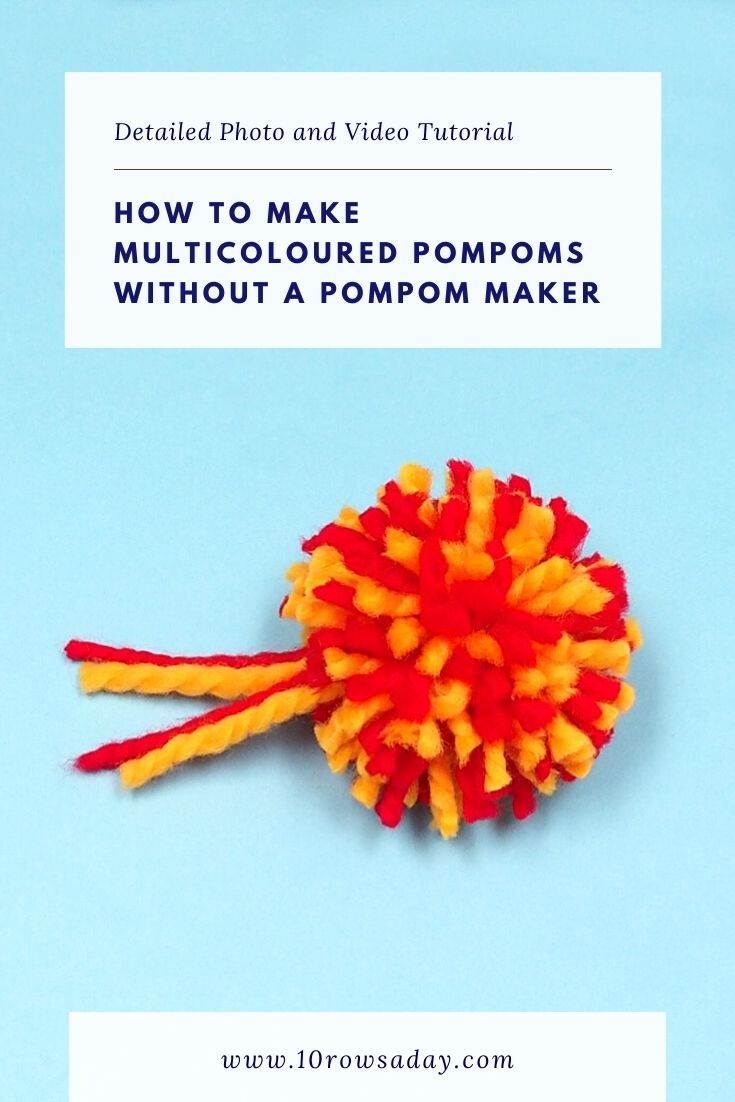