As I was working on the Everyday Tee pattern, I needed a way to avoid the jog in the thin stripes that decorate the body of the top. After testing a number of ways, I found the one that creates a perfectly jogless transition between colours.

This way is called the Raised Increase Method in the incredibly helpful book “The Principles of Knitting” by June Hemmons Hiatt. It works great for avoiding the jog in stripes that are two or more rounds wide.

Otherwise, the Raised Increase Method is the champion of jogless stripes (as long as the stripes are at least two rounds wide).

Let’s see what we should do to avoid the jog in two-round stripes. If you are a visual learner, follow the steps explained in this video tutorial.

When it is time to change the colour of the yarn to make the first stripe (usually we do it at the beginning of a new round), tie the yarn in the new colour to the working yarn with a simple knot. Move the knot close to the bottom of the stitch.

Use the yarn in the new colour to knit all stitches until you don’t have any stitches in the “old colour” on your needles.

This is the step where we fix the jog even though we don’t even see it yet. Let’s make sure we don’t ever see a jog in our projects again 🙂

Insert the tip of the right needle from back to front under the top part of the stitch that is below the first stitch on the left needle (it will be a stitch in the “old” colour).

Place that stitch on the left needle.

Knit these two stitches together.

Place a marker on the tip of the right needle. This marker indicates the spot where we should change the colour to make the next stripe.

As you see in the above photo, now I have two markers in the work – the purple one marks the beginning of the round, and the pink one shows the spot where I will change the colour next time.

In the swatch shown in the photo below, the first stitch of every narrow stripe is only one round tall, while the rest of the stripe is made by two rounds.

This little imperfection is not visible when the stripes are wide, but it is quite noticeable in stripes that are less than five rounds wide.

To make the stripes perfectly jogless, we not just lift the stitch as we did in step 3, but we also move the spot where the colour changes by one stitch. This concept is also known as “travelling jogless stripes”.

To help us remember where exactly we should change the colour again, we place that additional marker into the work.

Naturally, with every new stripe, the spot where we change the colour will move further and further from the beginning of the round. There is nothing wrong with that. The stripes we create are perfectly jogless, so no one will ever guess where the colours were changed. In fact, very few people will even THINK of guessing such a thing 🙂

We can see how the jogless stripes “travelled” in my swatch when we look at the wrong side of the work.

Now, that we understand the importance of the additional stitch marker, we can move on to the next step.

Work for as many rounds as you need to finish this stripe. If the stripe is two-rounds wide (as is the case with our example), work to the end of the second round.

Then work to the additional marker.

Remove the additional marker from the work and pick the yarn that you will use to make the next stripe.

This marker did a good job reminding us where we should change the colour of the yarn. Now we can let it rest until we work steps 2 and 3 and get to step 4. Then we’ll place this marker again to help us remember where to start the next stripe.

Repeat steps 2 through 5 to make as many stripes as you need.

Remember to work until you don’t have any stitches in the “old colour” on your needles in step 2. When we make the first stripe, it happens when we finish the first round. Because the spot where we change the colour moves every time we make a new stripe, we’ll need to work more stitches in step 2 with every stripe we make. There is no need to keep track of the number of those extra stitches. Simply look at your work and make sure the stitches sitting on the needles are all in the “new” colour.

If the stripes are wide, it could be hard to carry the yarn up the work. It is usually easier to cut the yarn every time we finish the stripe and re-attach it again (as we did in step 1) when it’s time to make another stripe in that colour.

The Everyday Tee features alternating narrow and wide stripes. To make those stripes I used the additional marker when I changed the colour from white to blue. Then I removed that marker, cut the white yarn and worked on the blue stripe. When it was time to add another white stripe to the project, I re-attached the white yarn at the beginning of the round.

As you see, it is easy to adjust these steps to make different combinations of jogless stripes to decorate countless socks, mittens, seamless hats and sweaters. 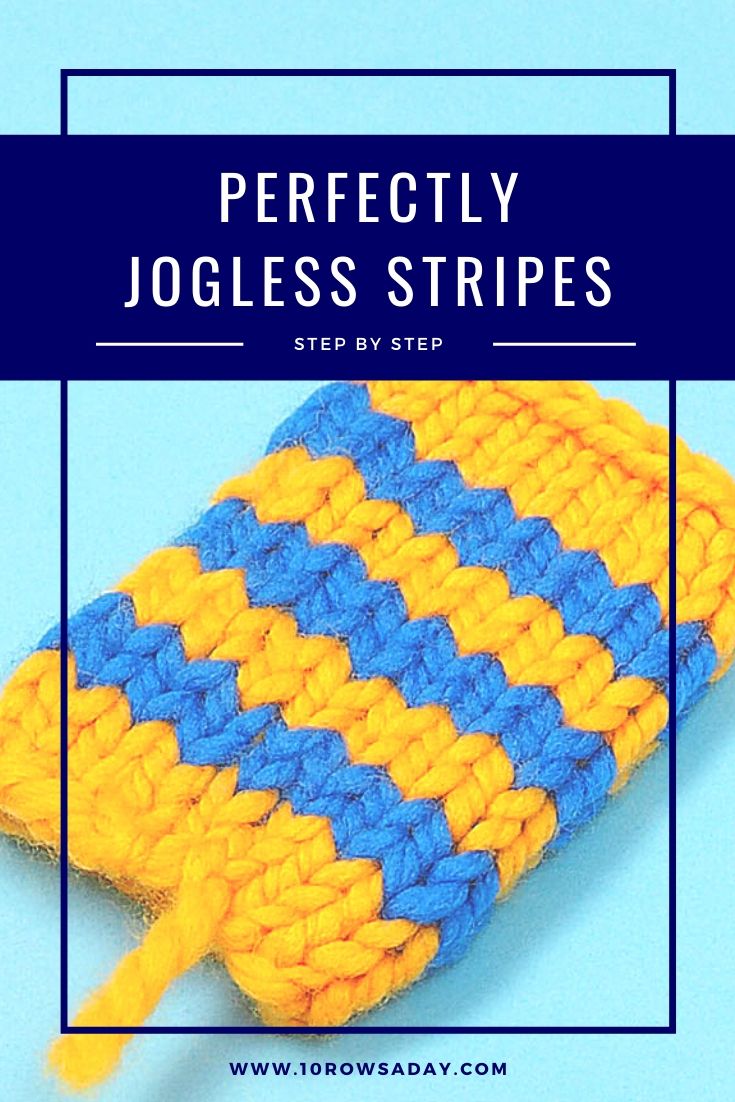 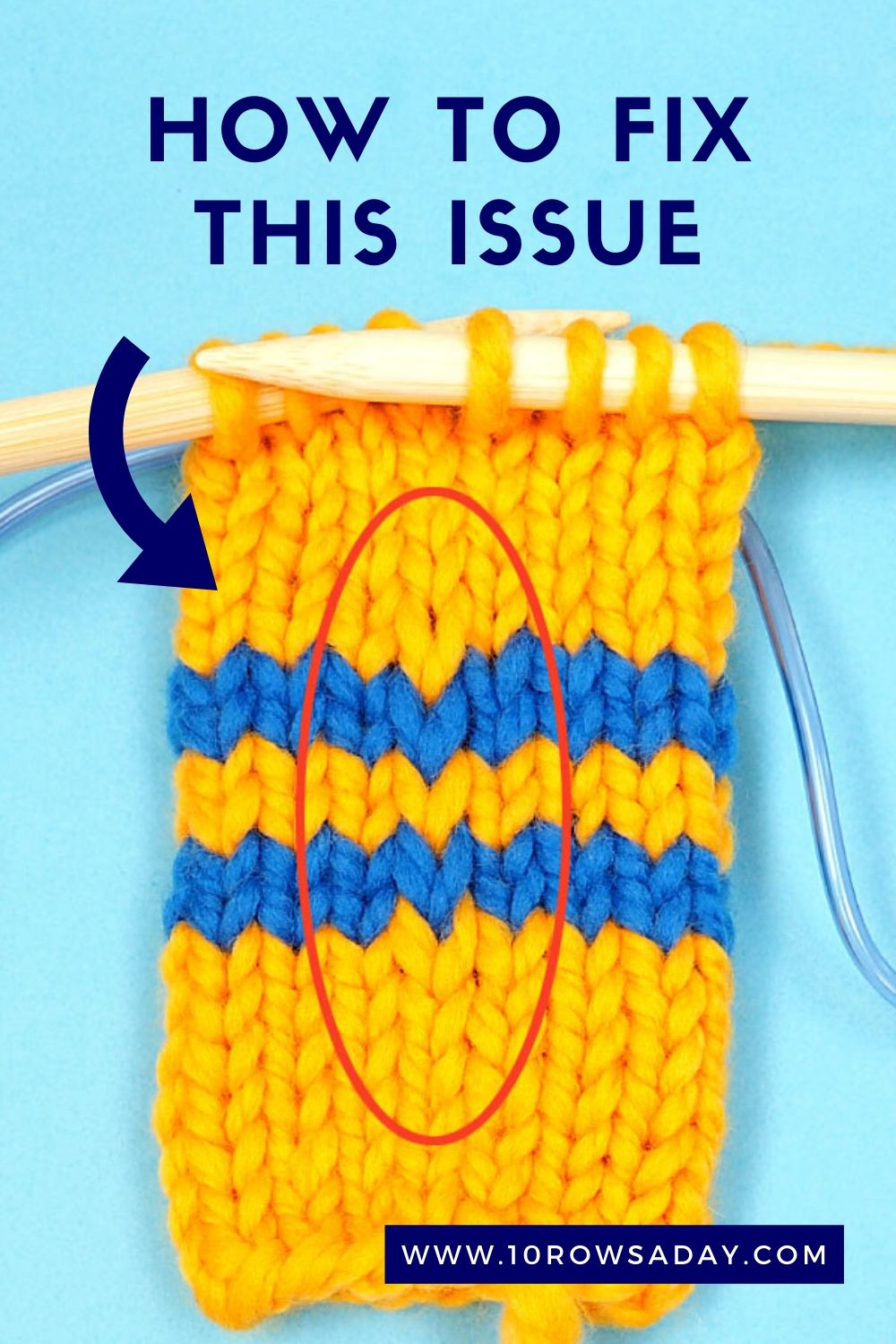