Estimating the length of a yarn tail is a small issue that can cause a lot of frustration when we use the long-tail cast on method. The yarn tail is often either too short or too long and the worst thing is that we see it only after we cast on a hundred stitches or so…

If the yarn tail turns out to be too long, we can always use it to seam knitted pieces together or, at worst, cut it and discard the yarn. It is not such a big deal unless we are working with a limited amount of expensive yarn and plan to use every bit of it.

Things get much more unpleasant when the yarn tail is too short. As a rule, we’ll have to unravel all stitches, leave a longer tail and start all over again.

After one of these unhappy incidents a few years ago, I was determined to find a reliable way to estimate the length of the yarn tail to make sure I never run out of yarn again.

I found a number of ways – some better than others. I tested all of them and now I’m happy to share with you three ways that are quite accurate and do not require making complicated calculations.

Before we take a look at each of these ways, please note that all estimates work only when we place the yarn tail on the left thumb and the working yarn on the left index finger when we cast on stitches using the long-tail cast on.

If you are a visual learner, watch every step described below in this video tutorial.

This way is very accurate and it works well for any yarn and any size of the needles.

On the downside, this way is the most tedious of the three ways described in this tutorial. It will take a few extra minutes of our time but it is not that bad considering the peace of mind we have knowing that we won’t run out of yarn before we cast on all stitches we need for the project.

Place the tail on your left thumb and the working yarn on your left index finger. Cast on 10 stitches not counting the slip knot.

Make another slip knot on the yarn tail close to the bottom of the last stitch.

Take the needle out of the stitches, unravel the cast on but leave both slip knots intact.

As you’ve probably guessed already, the length of yarn between the slip knots is the length that will be enough to cast on 10 stitches. We can measure this length, divide that measurement by 10 and multiply it by the number of stitches we need to cast on.

Or, we can simply “walk off the measurement” (as June Hemmons Hiatt calls in her remarkable book “The Principles of Knitting”) by folding the yarn one time for every ten stitches we plan to cast on. No math involved 🙂

The second way is not as accurate as the way #1, but it is much easier. In fact, it is so easy that it quickly became my personal favourite. I use it almost exclusively any time I need to cast on stitches with the long-tail cast on.

The biggest drawback of this way to estimate the length of the yarn tail is that it works best for yarns in DK and worsted weight and is a bit off when we work with bulky yarns.

The idea is very simple – a length of yarn between your fingertips and your elbow is enough to cast on 30 stitches.

Hold the yarn end with your fingertips and measure the length to your elbow.

Then fold this length one time for every 30 stitches you plan to cast on. That’s how simple it is.

I have no idea why it works and what is the math behind this basic estimation. All I know is that I’ve been using this way for several years, and it works like a charm every time (as long as the yarn is not thick and the yarn tail is placed on the left thumb while casting on stitches).

This approach to the “length-of-yarn-tail” problem is very different from the previous two ways.

We do not estimate the length of the yarn tail. Instead, we use two separate strands of yarn to make sure we don’t run out of yarn tail. Clever, isn’t it?

These two strands can come from two balls of the same yarn, or from the inside and outside of the same ball.

Because it is not an estimation, this way is good for any yarn and any size of the needles. It does not require any preparation or extra steps, but it results in additional two yarn tails that we’ll have to weave in once the project is finished.

Here’s how this way works (you can also watch it in this part of the video tutorial):

Align two strands of yarn and make a slip knot.

Place the slip knot on a needle and cast on all stitches you need for your project.

When using this way, it doesn’t matter which of the strands is on the left thumb at the time we cast on stitches. What does matter is the fact that the slip knot is not counted as a stitch.

Once you have all stitches on the needle, cut one of the strands leaving a small tail. Turn your work and use the other strand to work according to the pattern instructions for row 1 of your project. Stop when you get to the double-stranded slip knot at the end of the row.

Take the slip knot off the needle and unravel it.

Even if you don’t use any of the ways described in this tutorial and occasionally run out of yarn tail before you cast on all stitches required for the project, all is not lost.

In her book “Knitting Without Tears”, Elizabeth Zimmermann recommends that we align the short tail with a new strand of yarn.

Then cast on one stitch using two aligned strands together.

Drop the “old” tail and continue to cast on stitches with the “new” longer tail.

When the project is finished, carefully weave in the tails formed by this “cast on surgery” and no one will even know that you miscalculated the length of the yarn tail when you cast on stitches. 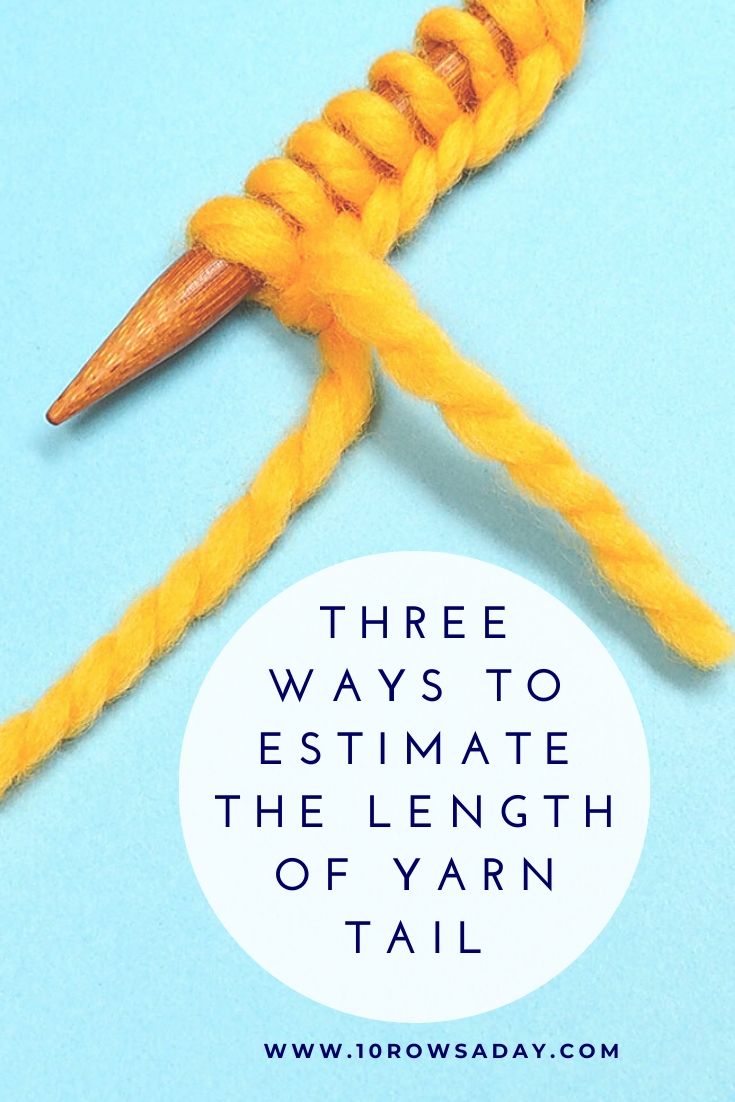 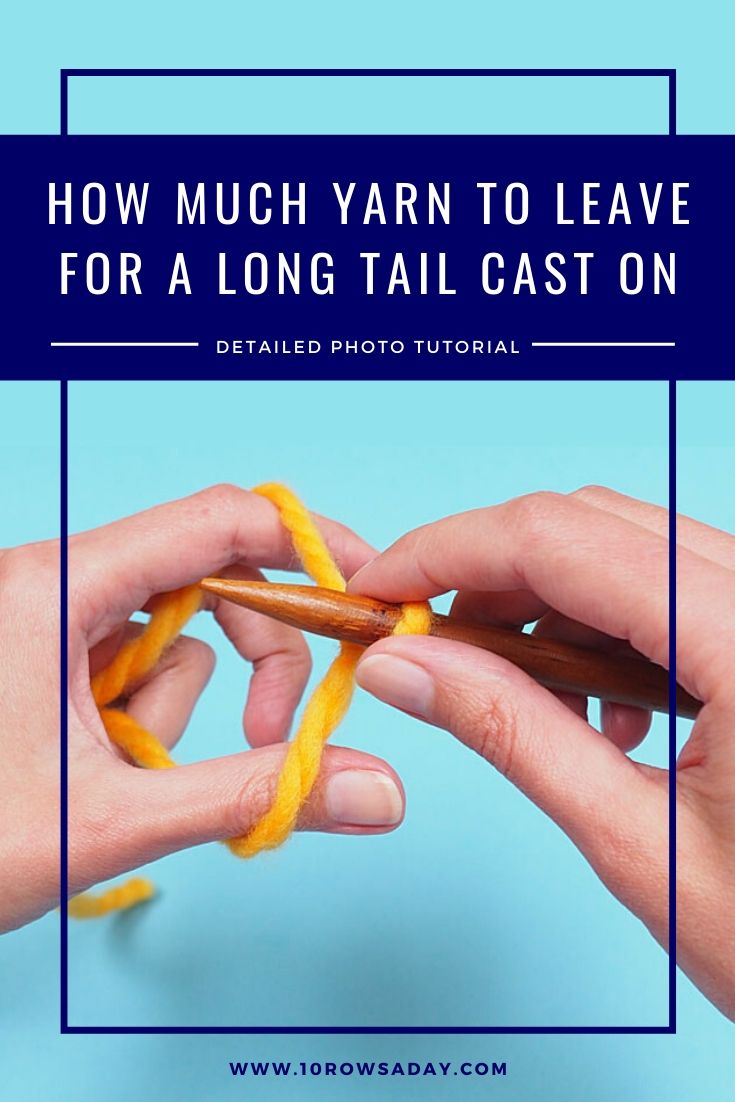 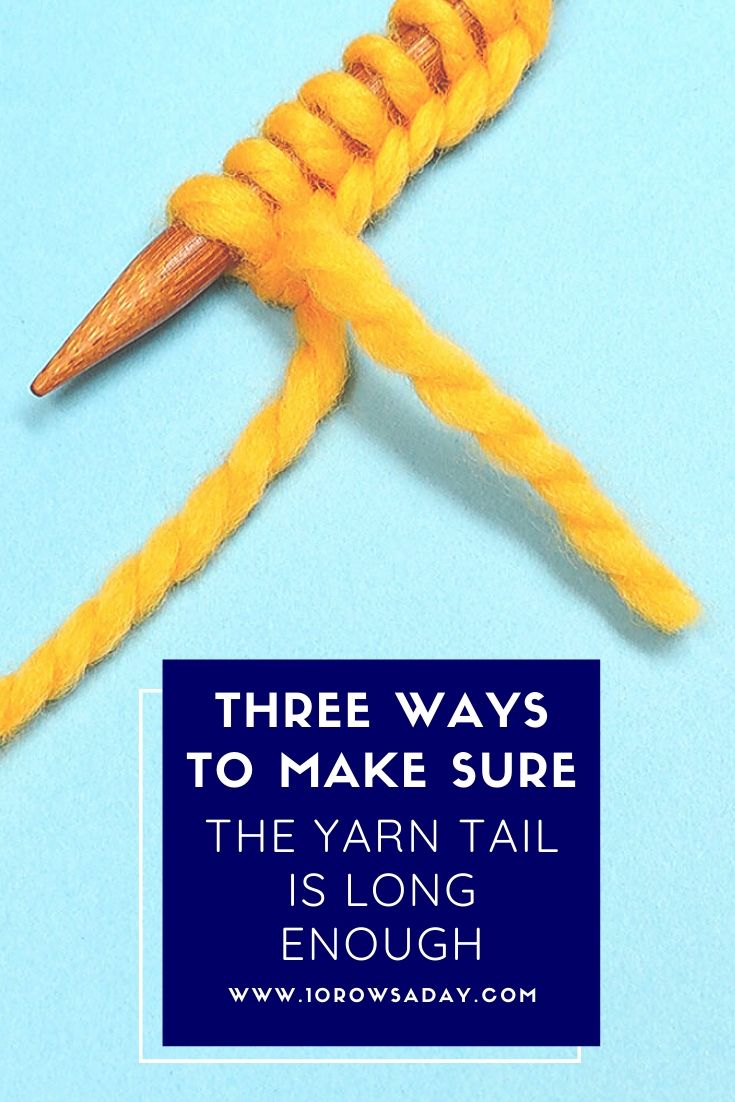